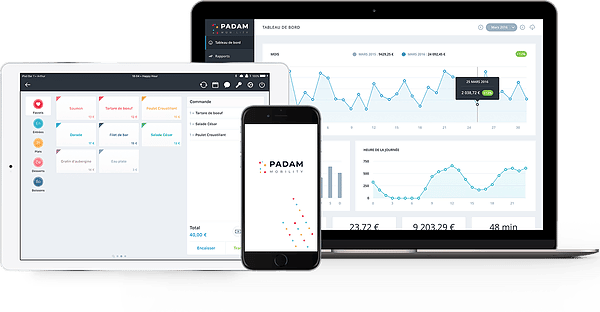 Startups like Padam are seldom seen in France. Firstly, due to its core business, dynamic demand-responsive transport, and secondly due to its history. It soon took off in France and was very quickly exported abroad. Padam was at inOut from 28 to 31 March. Let’s do the introductions…
Created in 2014, the startup changed direction in 2016. “We were BtoC orientated, offering a demand-responsive transport app for evening journeys by users in Paris, which were carried out using shared vans”, states Thibault Lécuyer, Marketing Director. “We designed our own dispatch algorithm. At the same time, we noticed that public transport was in real need of optimisation.” Padam therefore moved into the public sector and now offers SaaS software for dynamic demand-responsive transport.

So how does it work? Thibault Lécuyer explains: “rather than having fixed public transport lines, we remove the lines but keep the stops.” Of course, this is just the tip of the iceberg: below the surface, a fine-tuned engine works daily to ensure user journeys from point A to point B, in line with their schedule. And to optimise public transport flow management.
Padam provides three tools: a user app, a driver app providing route information and finally a management interface for transport operators. “We have developed a powerful algorithm: flow optimisation is carried out in real-time. The various options are recalculated as user requests are received, in order both to optimise routes and ensure that users can catch their bus within the stated time”, states Thibault Lécuyer.

Several types of usage have been observed and fully tested by Padam. The first or last mile, which currently requires the use of a private car and further intensifies heavy traffic in places such as stations. Bus lines in high demand at peak times and deserted at other times of the day. Companies located in business parks which are envisaging facilitating employee journeys, without the use of private cars. And modes of transport for people with reduced mobility, which must meet the needs of these users.
On this topic, Thibault Lécuyer emphasises: “companies do not need to leave this matter to the public sector alone, as we aim also to innovate in this field.” Rennes Métropole has launched a tender in response to this issue, for an inclusive approach to urban transport.
More transversely, “our solution is extremely relevant for poorly served areas, in terms of area and frequency”. Padam is already present in Île-de-France, Lille, Orléans, and Padua in Italy. In Padua, the start-up has tested a hybrid solution, where the bus follows its fixed line at peak times, but becomes flexible at other times of the day to meet user demand.
“At the current time, modes of public transport provide a service with the expectation that demand will be met. With our solution, the service meets the demand.” Thibault Lécuyer adds “user satisfaction is achieved, operating costs are reduced for operators and more people are transported each day.”
Ziad Khoury, co-founder of Padam, was at inOut on 29 March to participate in the conference “Which services can be offered by “Mobility as a Service”?”